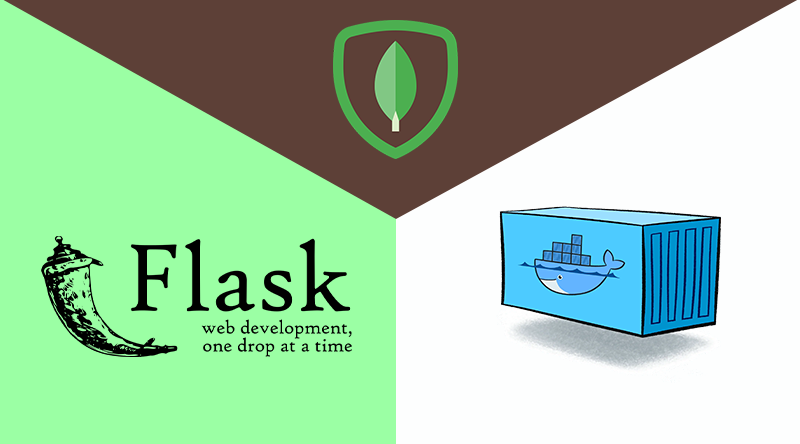 How to Set Up Flask with MongoDB and Docker: Complete Guide

In this guide you will learn how to deploy a Python Flask and MongoDB application with Docker. The implementation uses Docker Engine and Docker-compose.

A lot of buzzwords mentioned may sound like the goal is quite complex but let’s break it down into simple steps and conquer them one by one.

Flask is a Python web micro-framework that provides you with the tools, libraries and technologies you need to build a modern web application. A micro-framework is a framework with little to no dependencies to external libraries. This has pros and cons. Pros would be that the framework is light—there is little dependency to update and watch for security bugs. Cons are that sometimes you will have to do more work by yourself or increase the list of dependencies by adding plugins. Flask has the following dependencies:

MongoDB is a popular open source database, but unlike other databases it’s classified as a NoSQL database. The term ‘NoSQL’ means ‘non-relational’. It means that MongoDB is a document-oriented database that stores data in flexible BSON (similar to JSON format) documents. This is different from the table-like relational database structure. Developers can think of MongoDB as a persistent repository of Python dictionaries. The following image illustrates a simple MongoDB document Structure:

The advantages of using documents are:

Docker is an application that simplifies the process of managing application processes in containers. Containers let you run your applications in resource-isolated processes. They’re similar to virtual machines, but containers are more portable, more resource-friendly, and more dependent on the host operating system.

Why Flask, MongoDB and Docker?

Flask and MongoDB are popular choices for building web applications, and using Docker can help you take your app to the next level. By containerizing your app with Docker, you can easily manage dependencies and deploy your app to any environment with confidence.

If you’re new to Flask and MongoDB, getting started can seem intimidating. But using Docker can make the process much smoother by providing a consistent environment for development and deployment. In this tutorial, we’ll show you how to set up a Flask app with MongoDB and Docker from scratch.

Dockerize your Flask + MongoDB and Application

Follow the instructions in the following links to install Docker Desktop on:

Let’s build a simple tasks app where you can create, update, and delete simple one liner tasks. This data will be stored inside a MongoDB database. Complete the following steps on your local machine to create the Flask application files.

2.1 — Create a new project directory and switch to that directory with the following code:

Create a new file called app.py in your project directory and paste the following code:

In the app.py file, we first import all the required modules and create instances of the Flask class (our app) and the PyMongo class (our database).

Note: The hostname in the MONGO_URI Flask configuration variable has been set to ‘mongo’ instead of ‘localhost’. This is because ‘mongo’ will be the name assigned to our database container since containers in the same Docker network can talk to each other by their names.

Our app contains six functions which are assigned URLs by @app.route() Python decorator. At first glance, it is easy to understand that the decorator is telling our app that whenever a user visits our @app domain at the given route(), execute the underlying function.

In the final section, where we run the app, we define the host parameter as ‘0.0.0.0’ to make the server publicly available, running on the machine’s IP address. The machine here I am talking about is a container.  When it runs, this application binds to all IPs on the system (‘0.0.0.0’) and listens on port 5000, which is the default Flask port.

Edit the file and add the following code:

Then, save the file.

requirements.txt files are used to specify what Python packages are required by the application. For this minimal Flask application there are two packages that are required, Flask and Flask-PyMongo which will be installed when we build our Docker image. PyMongo is a Python distribution containing tools for working with MongoDB.

Supply your username and password to authenticate with Docker Hub.

Now, let us build a Docker image of our app which can be pushed to the Docker Hub registry. Inside our working directory flask-mongodb-containers, create a new file named Dockerfile. Edit the file and add the following commands to it:

We are using the official Python image, based on the Alpine Linux project, as the base image. The Python alpine image ensures the resulting container is as compact and small as possible. We are then copying the contents of our working directory to a new directory on the image. We are instructing the image to expose the port 5000 when run as a container, on which we can access our app. Finally, our app container is configured to run python app.py automatically when it is created.

At this point, your working directory flask-mongodb-containers should contain the following files:

Complete the following steps to build and test the container image locally:

Execute the following command from the same directory as the Dockerfile:

This command builds a container using the Dockerfile in the current directory with tag <username>/<image-name>:<version> format.

After executing the previous command, the Flask app will run in the container and will be exposed to your local system on port 5000.

Browse to http://localhost:5000 or use curl from the command line and you will see “Welcome to Tasks App!”

Run the following commands to test your image locally:

To make your image publicly available on Docker Hub so that anybody in the world can download and run it, run the following command:

Using Flask, MongoDB, and Docker together can help you build powerful and scalable web applications. By containerizing your app with Docker, you can easily manage dependencies and deploy your app to any environment with confidence. Whether you’re a seasoned developer or just getting started with these technologies, following our step-by-step guide to setting up a Flask app with MongoDB and Docker can help you streamline your workflow and bring your web application to life.